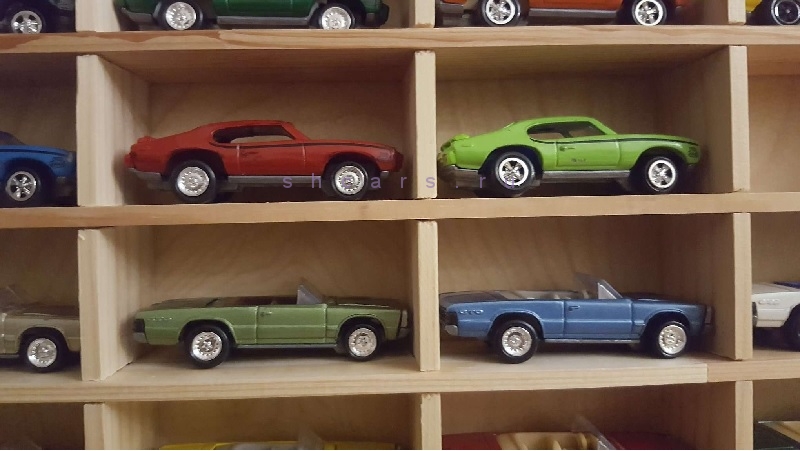 My Meeting with the Metalman

I recently had the opportunity to sit down with Mr. David Scott, Head Curator of Metals at the Getty Conservation Institute (GCI), which is part of the Getty Museum here in Los Angeles. The GCI is the research & preservation arm of the Getty, working with paintings, sculptures and art objects dating back thousands of years. Mr. Scott oversees the GCI’s metals department, where research is conducted into such areas as the conservation of art objects and the strutural reconstruction of artifacts (including sculptures and ancient buildings/ruins) to such arcane subjects as examining trace minerals found in paint pigments.

The reasons for my meeting were twofold: One, to find out the best way to preserve my redlines, and two, to find out more about the various effects the environment has on these cars in general.
It was quite amusing to be led into the building where the GCI is located: Surrounded by millions of dollars in hi-tec equipment (including an x-ray machine the size of an entire room) and state-of-the-art labs, to enter bearing a sampling of my humble little diecast toys. Mr. Scott was amused as well, but during the course of our conversation became quite taken with the cars and was very enthusiastic in his insights and advice.

Ok, let’s go to the good news first: If you follow some general guidelines, you can preserve your cars quite well for your great great great grandkids to eventually sell so they can go buy the newest fusion-powered spacerod for jaunts to Alpha Centauri. The bad news is that you can also do a lot of things wrong (as I was) and have some rapidly deteriorating cars in no time at all.
Basically, one needs to remember this: everything is falling apart, redlines included. The plastic shrinks and gets brittle, UV and moisture assault the metal, and various acids and pollutants in the air are working to dissolve everything. But the process can be slowed down — way down — so that items can be preserved for a long time without much apparent decay. So first, let’s find out about what hideous things are out there, waiting to mangle many a Maverick.

The Axis of Evil (plus one)

Unless you live in a vacuum, there will be some degree of humidity in the air, which is constantly at work on the metal and will eventually dull any unpainted surface as well as leading to corrosion. If you live in the south or the eastern parts of the US, this can be a major problem.

These are given off by wood and wood byproducts as a natural part of the aging process. These acids bind with metals and begin the oxidization process, which can ultimately lead to the dulling, pitting, cracking and flaking of many different metals, especially zinc and lead-based ones. Ain’t nature great? Then there’s the problem of you yourself. The oils in our skin are a great source of acids that are quite corrosive, and what’s even more fun is that a person’s PH differs wildly. You may be able to handle a car 500 times with little or no wear, but someone else may have Sweat from heck that eats into the base of your prized 442 from one just handling. Take a look at some of the bases of your cars — you’re sure to find an oxidized fingerprint or two!

Especially if you live in urban areas, various manmade gasses and particulates can wreak the same havoc as organic pollutants (see above).

UV can not only make your aqua car into ice aqua (or your purple Cord into a pink one), it can actually trigger chemical reactions in metal that will hasten the decomposing process. UV can also be a cause of splotchy toning — it penetrates right thru Spectraflame paint and causes alloys to discolor or darken. (Toning can also occur just from impurities within the metal, which is more common. Alas, Mr. Scott was unable to tell me if this type of toning goes it’s merry way for the life of the car or stops at some point — maybe someone can do a ten-year photographic study and let us know!)

It Came from Beyond the Display Case

Basically all these influences result in two types of corrosion: Calcium carbonate and zinc carbonate. One is not so bad, and the other is, um — ugh.
Calcium carbonate is a white powdery film that adheres to the surface of exposed metal areas. High humidity and exposure to gases are the main culprits. If you catch it in time, it can be removed with a soft brush or a quick rinse under some lukewarm water and cloth dried (then let the car sit out in the open for a week or so).
Zinc carbonate, on the other hand, is not good. This is where the corrosion has actually penetrated the surface of the metal and started to eat away at the zinc. It too, has a powdery appearance, but unlike the calcium carbonate, it will not rub/wash off. The only way to remove it is to manually scrape it off, preferably with something that is not as hard as the surface of the metal (a toothpick, or a hard plastic object would be a good choice). Once zinc carbonate has occurred on a car, it can spread, so it’s best to try and scrape around and try and get rid of it. It would also be wise to separate it from other cars. Some cars may be more susceptible to it than others, probably due to better or worse plating jobs. I have three cars in my collection that have this stuff, and no matter how well I scrape, the afflicted areas always appear scarred. Really a bummer.

Alright, Already — so Waddya do About it?

Well, short of keeping your collection in an airtight bunker five stories below ground, here are some tips. If you want to display your cars, do not, I repeat DO NOT, display them in wooden display cases, especially ones with unpainted/unvarnished surfaces. Doesn’t matter what kind of wood — just don’t do it. If you currently have cars in such a case, I highly recommend you remove them AT ONCE. The organic acids from the wood will really eat away at the cars, particularly if the case closes fairly airtight. If you do remove your cars from such a case, put them out in the open with lots of air circulation (and out of direct light) for a week or two. This allows any of the gases absorbed by the cars to dissipate into the air. If you take your cars from a wooden caseand pop them directly into (non-PVC) plastic containers, or any other sort of airtight container, the gases absorbed by the car continue to work their magic for a period of time, leading to more damage.
Now, there is an alternative to the ‘ol wooden display case, and it’s the best preservation method out there: metal and glass. They’re totally inert, and the best materials by far to display metal objects. Plexiglass is ok, but some solvents in the glue that binds pieces together can give off — you guessed it — metal-munching gases. Also, if you elect to paint a metal cabinet, only use a baked-on enamel and let it sit two weeks after painting before placing anything in it.
Two other items can help in this cause: Silica Gel and Activated Carbon Cloth. Silica gel (usually found in small packets) absorbs moisture. Activated carbon cloth is a black fabric that not only absorbs moisture, but gases, odors, errant molecules — you name it. It can be cut and sewn to fit anywhere. A strip along the bottom of a display case ensures that as many gases and pollutants are absorbed as possible. At the end of this long-winded essay you’ll find a link if you’d like to order some. If you’re worried about UV, there is glass available that is UV-protected, and there are also fine mesh screens that absorb UV as well. And if you’re concerned about skin acids, well, about the only thing you can do is pick up the cars by the edges or (gasp) wear gloves.
If you store your cars outside of a display case, it’s probably a good idea to keep some silica paks close by (and/or the carbon cloth). If you use plastic containers, make sure they’re non-PVC, and if you cushion the cars, don’t use tissue/toilet paper, paper towels or felt — hey, they’re wood-based products, remember? Non-PVC bubble wrap should do the trick.

Well, I hate to tell you, but keeping a car inside a blister is not the optimal way of preserving a car for future generations. First of all, the air inside the blister is NOT akin to an airtight time capsule — there’s plenty of “breathing’ that occurs thru the cardboard of the blister. Plus, depending on the amount of pulp in the cardboard and the fun toxins in the glue that holds the bubble to the card, you have your own miniature laboratory of gasses and acids at work. Mr. Scott recommends that if you do keep cars in blisters, to store the blisters in a container with silica and carbon cloth to absorb as much of the baddies as possible.
Or you could just rip the suckers and set them free . . .

An Ounce of Prevention

I’m sure some of these solutions will meet with some skepticism among fellow collectors — so be it. But with prices for redlines going higher and higher, and with some people’s collections being valued in the tens or hundreds of thousands of dollars, it makes sense to me to try and protect these cars as well as possible. Whether you value these toys for sentimental or monetary reasons, a few simple steps could keep them looking sharp for many years to come.